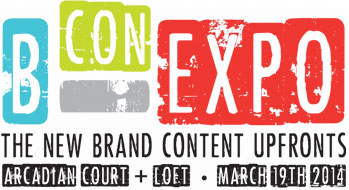 Opening Keynote: Branded Content is King - The Future of Entertainment

The question is not whether branded content is the future of advertising, but whether it's the future of media and entertainment consumption. Electus is a production studio that unites creators, advertisers and distributors under one roof, spawning the likes of Mob Wives and Fashion Star. From format shows like Bet on Baby to Samsung's Ultimate Gamer reality series which ran on SyFy and USA Networks, Electus is redefining how entertainment is produced, packaged and consumed. In conversation with Barry Krause, Laura Caraccioli, President, Content Marketing for Electus, offers her insights into how next generation studios are leveraging brands, entertainment and pop culture ... and bravely makes a few predictions on future formats and content.

Vice has revolutionized the way content is produced, distributed and monetized, spawning a record label, a pub, a film company and a book division from the magazine launched out of Montreal two decades ago. But the reason adland is so interested in the Vice model – WPP bought a stake – is its brand content innovation and its fanbase-building success with online video.

Working with brands such as Nike, Intel and Absolut, in-house agency Virtue creates collaborations that are perceived as genuine entertainment, maintaining Vice's edgy voice and indie cred. And Vice has also increased its reach via its own ad network, acquisitions and new launches, from Noisey to Fightland. In conversation with Free Agency's Chris Unwin, Vice's chief strategist Spencer Baim explains how the company's Immersionist journalism culture has influenced the way brands and media can work together, shedding light on the future of brand content and the blurring roles of publisher and agency.

Get a chance to spend quality time with an expert discussing a specific aspect of branded content with our luncheon roundtable sessions. Join us and sit in on the discussion of your choice (onsite signup session required).

CBC's content, programming and revenue executives share upcoming opportunities for advertisers plus the critical elements required to undertake successful branded entertainment partnerships with Canada's public broadcaster - from music to sports to entertainment programming - all through the creative filter, process and lens of what makes sense to CBC's visitors, listeners and viewers.

Align your brand with an incredible movement; MAKERS is a landmark television and digital video initiative that aims to be the largest video collection of powerful women's stories ever assembled. MAKERS brings together the stories of well-known figures such as Nora Ephron, Gloria Steinem and Arianna Huffington with the lesser known trailblazers such as Kathrine Switzer, the first woman to run the Boston Marathon. In the US, the initiative has seen great success with 60 million video views since launch. And we're bringing it to Canada with the support of great Canadian brands who want to lead the way in the content revolution.

The Globe and Mail: The New Brand Content Upfronts

The Globe and Mail's custom content group discusses the purpose, process and payoff of a content marketing strategy.

Join Brand Partnership Manager Connie Corner and our guest panelists including Globe and Mail Editors and clients as they discuss the collaborative and creative approach to telling brand stories.

Creating donuts for Tim Hortons in Donut Showdown, demonstrating GE appliances in Top Chef Canada and developing twists for Twistos in Big Brother Canada are just a few examples of Shaw Media's commitment to telling advertisers brand stories. Shaw Media produces over 650 hours of original programming each year with a keen focus on integration and branded content. Drama, Comedy, Celebrity, Reality, Design, Food, Home Improvement....Shaw Media has the properties and the expertise to reach every audience. Join Shaw Media as they share case studies and reveal what's new on the content marketing slate!

Yuri Machado, SVP of Strategy and 3i, is a key player in Postmedia's branded content initiatives. He has spearheaded a variety of business partnerships to help expand content marketing opportunities and develop a customer-focused strategy for success. Duncan Clark, VP of Strategic Initiatives, has taken a different approach to content marketing. He has identified key partnerships in the social space to organically build communities where brands and people collide. Yuri and Duncan have both been successful in developing unique ways to get the right message to the right audience.

In this session, they will explain their approaches to content marketing, explore strategic partnerships and provide award-winning examples from projects such as Gastropost (Canadian Online Publishing Awards: Gold – Best Use of Social Media). These innovative content marketing solutions signify the importance of exploring strategic partnerships and have helped usher in the new era of news media.

Bell Media was named by strategy magazine as 2013 Brand Partner of the Year for its unique and innovative partnerships with a variety of advertisers across its vast content portfolio including The Amazing Race Canada, Master Chef Canada, The Much Music Video Awards, etalk, The Social, TSN World Junior Hockey Championships etc.

Meet the Content leaders of Bell Media as they discuss the planning activity that occurs when developing new content ideas across its Acquisitions, Independent Production, In-House Production & TSN Production teams. They will take part in a moderated panel and describe how creating relevant content for audiences also provides opportunities for advertising partners to create amazing Branded Content that meets their business objectives.

In a pithy creative rebuttal to the long-form, there's a plethora of short-and-sweet innovative projects popping up. From instagram to mini-series-as-commercials, this panel explores some of the unusual new approaches and cool technologies in the branded content space.

Are you distracted by content metrics? Is the noise taking you off focus and keeping your from achieving your strategic goals?

Robert Rose, chief strategist at Content Marketing Institute and co-author of the book It Takes a Content Factory, argues that by focusing too closely on numbers, brands sometimes lose sight of the end game: more valuable customers that are highly engaged.

Rose addresses better ways to monitor, analyze and optimize every piece of content, at every stage of the buying process.

The Brand as the Main Event: How to Compete on the Global Content Stage

The gradual blurring of the lines between brand content and pure entertainment will eventually lead companies in a new direction: the era of brands as full-fledged entertainment properties. In a new white paper entitled "Going Beyond Sponsorship", Bertrand Cesvet, chairman of Sid Lee, argues that brands can no longer rely on leveraging someone else's entertainment value. The ultimate goal should be to "build owned entertainment properties on a massive scale that deliver transformative consumer experiences". Cesvet argues these landmark experiences could reshape brand associations entirely. In a twist on Marshall McLuhan: "The experience is the message: the consumer is the medium."

The Artist and the Brand: How Creator-Powered Content is Shaping Brand Evolution

As media consumption becomes increasingly dominated by the social feed, personalities are disproportionately representing the top channels on YouTube, Twitter, Tumblr and Facebook.
Funny or Die has been a front-runner in tapping these celebs for brand light viral videos that defy ad or comedy categorization. While most have subtle integrations, FOD is now working more directly with brands.
This begs the question: What is the new role of creator collaboration and how does it impact a brand's content marketing efforts?
Chris Bruss, VP of branded entertainment for Funny or Die and president of FOD's commercial production company Gifted Youth, discusses the pros (and cons) of artist-and-brand-powered content evolution.

Brands seek to forge emotional connections, so little wonder many are turning to a traditionally compelling format – the documentary. In a post-script to the Olympics, this session goes behind the scene on two long-form branded content films about the love of the game. One doc was part of CBC's Sochi coverage, created in league with Canadian Tire, Sport Chek and Sports Experts, while the documentary series "The NHL Revealed" is an NHL-branded property involving Gatorade. The impact of these projects begs the question: in an attention-span-challenged environment, where viral buzz is fuelled by media innovation, what are the advantages of going long form and old school?

The Brand, the Broadcaster and the Snowboarders: The Making of McMorris & McMorris

Red Bull has earned a legion of loyal consumers through its ballsy marketing and unique presence on the entertainment scene, from creating its own sporting events to producing films and running its own music studio and record label. A leader in the brand content space, Red Bull Media House's original productions – which are as sophisticated as any shows produced by traditional media companies – have reshaped the meaning of branded entertainment.

McMorris & McMorris is a prime example of Red Bull Media House's marketing ethos. This eight-part docu-series for MTV follows Mark and Craig McMorris, professional snowboarding brothers from Regina, Saskatchewan, as they travel and compete around the world. Execs from Red Bull Media House, MTV and Buck Productions will convene for an "anatomy of a deal" panel to discuss the creation and execution of McMorris & McMorris.